The Office of Residential Life and Housing offers our residential students a variety of experiential learning opportunities to support their academic, social, and personal success. All students are required to live in college housing through their senior year. Hartwick students are offered the following housing options for the 2021-2022 Academic Year.

First Year students are offered a variety of living arrangements at Hartwick. Holmes Hall is a corridor-style building comprised of single, double, and triple rooms. This building has single-gendered floors for students in all class years. Two large lounges, one with a kitchen and one created for study, give Holmes residents plenty of space to spread out beyond their room. A laundry room is located on the first floor in addition to a recreational lounge with a Foosball table. Resident Advisors live in the residence hall to help support and foster a safe, positive, and engaging community.

Originally a dormitory for women, construction on Holmes Hall was completed in 1961. It was made possible by a gift of the late John D. Holmes of Richmondville, New York, in memory of his wife, Edith Fraser Holmes.

Students in the Living Learning Center Program took classes together, and their classrooms — as well as the offices of faculty who were teaching them — were in the residence hall.  The program was intended to increase contact between faculty and students and to foster informal discussion of course content. 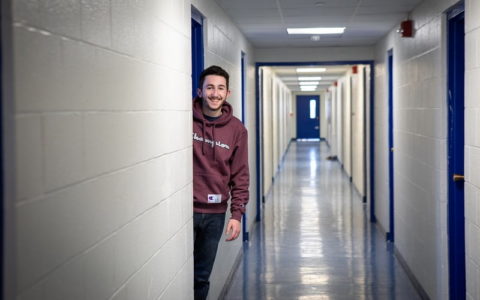 Saxton Hall is a corridor-style building, open to all class years, co-ed, comprised of single, double, and triple rooms with a 200-student capacity. Saxton has a lounge on each floor, and a laundry room and kitchen area on the first floor. Conveniently located next to Anderson Center for the Arts and Dewar Union, with a shared volleyball court outside, Saxton Hall is a student favorite for those who want to be near the action! One professional staff member and Resident Advisors live in the building to help support and foster a safe, positive and engaging community.

Seneca Hall opened in the Fall of 1966. It was renamed Saxton in memory of Andrew B. Saxton of Oneonta through the generosity of his daughter, Anna Bernice Saxton ’40, a Hartwick alumna. Built in 1995, Oyaron House is comprised of single, double, and triple room options. This co-ed, corridor-style residence hall. There are study cubicles on the fourth floor, plus a laundry room, TV lounge, and kitchenette on the first floor. Additionally, there are several social lounges for students to connect with each other and make new friends. In the warmer months, residents frequent the beautiful outdoor space. Resident Advisors live in the building to help support and foster a safe, positive and engaging community.

Oyaron House was built in 1995 and is the “sister” residence hall to Hilltop House. Students were very involved in the planning and got to pick everything from carpets to door tags. When they opened, 229 students lived in Hilltop and Oyaron Houses, which were called New Res I and New Res II until formally named for the hillside landscape that surrounds them. A faculty member filled a Faculty-in-Residence position serving both Hilltop and Oyaron. Built in 1995, Hilltop House is a corridor-style building comprised of single, double, and triple rooms.

There are study cubicles located on the fourth floor, a laundry room, TV lounge and kitchenette on the first floor, as well as several social lounges for students to connect outside the classroom. In the warmer months, residents frequent the beautiful outdoor space. An Area Coordinator and Resident Advisors live in the building to help support and foster a safe, positive and engaging community.

Hilltop House was built in 1995 and is the “sister” residence hall to Oyaron House. Students were very involved in the planning and got to pick everything from carpets to door tags. When they opened, 229 students lived in Hilltop and Oyaron Houses, which were called New Res I and New Res II until formally named for the hillside landscape that surrounds them. A faculty member filled a Faculty-in-Residence position serving both Hilltop and Oyaron.

Juniors and Sophomore students are offered a variety of living arrangements at Hartwick. Smith Hall is a corridor-style building with double and single rooms, with the capacity to house 224 first-year students. It offers study and social lounges and community-styled learning floors for residents to become friends while living in an academically stimulating environment. There is one large social lounge and a laundry room located on the first floor. A professional staff member and Resident Advisors live in the building to help support and foster a safe, positive, and engaging community.

Originally East Hall, a men’s dormitory, construction was completed in 1964. Renamed Smith Hall in memory of Charles and Charlotte Smith of Oneonta, it housed men in one wing and women in the other. This was considered somewhat daring in those days, though the old Hartwick Seminary had a similar arrangement nearly a century before. Alumni Hall was renamed Wilder Hall in 1999 in honor of President Dr. Philip S. Wilder, Jr., and Barbara Wilder, who served the College from 1977 to 1992. Under President Wilder, the College was characterized by the strengthening of its faculty and student body, and by the building of strong financial support. 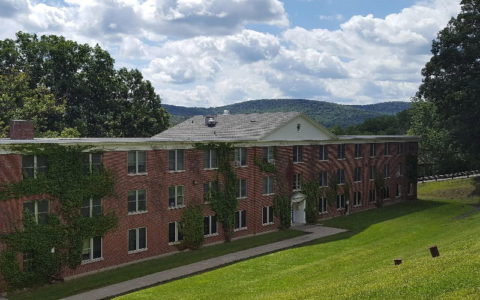 “To live in van Ess, is to love van Ess.” This residence hall in the middle of campus. A laundry room is located on the first floor and a TV lounge/kitchen space make it easy for residents to cook and mingle with each other outside of their rooms. Resident Advisors live in this residence hall to help support and foster a safe, positive, and engaging community.

Upperclassmen students are offered a variety of living arrangements at Hartwick. About the Apartment Community

This 31,000 square foot facility, opened in Fall 2017, was designed to give upper-class students the opportunity to feel independent while still enjoying the convenience of living on campus! The Apartments house 72 students and feature two-and-four bedroom apartment options. Each apartment is independently climate controlled with central heat and air, and equipped with a full kitchen and a bathroom for every two students in each unit. There is a laundry facility in the building as well as a wide front porch with rocking chairs that overlook the picturesque Susquehanna River Valley. Several community and meeting spaces with an additional outside green space make the apartments a great place to be!

The history of the Apartments is still being written. We hope that you’re a part of it! About the Townhouse Community

Named in honor of former President Miller Ritchie, the Ritchie Quad was dedicated in October 1986 and was built to house 80 students in 20 townhouses. Since 1986, the Richie Quad Townhouses have offered townhouse living options for upper-class residents looking for additional independence with the convenience of living near classes and friends. Each townhouse has a full kitchen, living room, three bedrooms, and two bathrooms. A nearby laundry facility makes it easy for residents in the Townhouses to accomplish this task while connecting with other residents.

The idea of the Townhouses is to duplicate, as far as possible, the atmosphere of living downtown. The housing selection for the Townhouses was weighted towards seniors, but juniors could also participate. Named after former President of the Board of Trustees Charles W. Leitzell, Leitzell Hall is a four-person suite-style building, comprised of four-person suites housing a total of 76 students. Each air-conditioned suite consists of two bedrooms, one bathroom, and a common area. Additionally, it offers a TV lounge, laundry room, and kitchen area on the first floor. Resident Advisors live in Leitzelll to help support and foster a safe, positive, and engaging community among the students who live there.

The original Leitzell Hall burned down in 1958. The new dormitory was completed that same year, and dedicated on October 3. Hilltops, Sept. 19, 1958

In 1973, when plans were announced to change Leitzell from an all male dormitory to an all female dormitory, residents (known as the “Leitzell Animals”) placed their stereo speakers in the windows pointing toward the valley, and at midnight played them at full blast in protest. They were heard as far away as Wilbur Park. Hilltops, April 19 & May 3, 1973 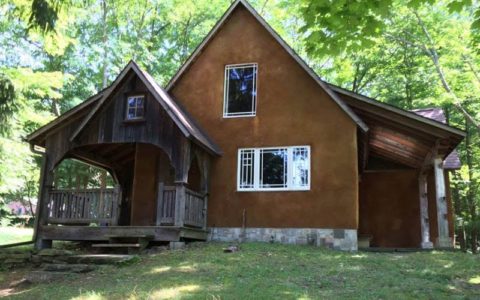 Students can live in and learn from a primarily natural setting. Pine Lake is a place where challenge, reflection, and recreation can lead to personal renewal, growth, appreciation of nature, and responsible environmental stewardship. If you like the outdoors and living in a natural setting, Pine Lake is for you!
Students residing at Pine Lake Campus, may not be under College disciplinary sanction and should be in good academic standing (GPA greater than 2.25) and must also provide their own transportation.

More information can be found in the Pine Lake Manual.

Pine Lake provides Hartwick students with opportunities for hands-on research, academic study, and self-discovery. Students can live in and learn in a natural setting, with several rustic and sustainably-built lodging options. It’s a place to learn about the natural environment, the history of human land use, and much more.  Pine Lake continues to provide a place where challenge, reflection, and recreation lead to personal renewal and growth, an appreciation of nature, and responsible environmental stewardship.

Students can indicate gender identity on their housing application. Students who indicate they are non-binary, transgender, or indicate they are comfortable living in a mixed gender room will have conversations with professional staff in the Office of Residential Life and Housing to determine a roommate match. First-year students are only assigned to gender-inclusive spaces when requested. All students who consider themselves supportive of or a member of the LGBTQ+ community, and are comfortable having a roommate of any gender identity or expression are eligible for this housing option.

Hartwick offers a gender inclusive floor in one of our residence halls on campus. Students can pick the roommates of their choosing, regardless of gender, when selecting suites or doubles. All multi-stall bathrooms in regular corridors are designated by gender. Bathrooms in suites and apartments are gender inclusive.

For upper-class students assigned after the selection process, we communicate with the students of the suite and the student moving in to make sure everyone is comfortable with the situation before assigning someone to a mixed gender suite. We do not assign students to mixed gender doubles.

If you have questions or concerns about your gender-inclusive housing experience, please reach out to the Director and/or Associate Director of Residential Life & Housing.

Theme Communities offers students an opportunity to live and learn with peers who share a passion area or a lived experience. Intentionally creating small communities on one floor within a larger residence hall allows students to quickly develop life-long friendships.

This community is designed for students in nursing or science degrees, or with an interest in science, technology, engineering, math, and physical sciences. Located close to the Johnstone Science Center, where the majority of these classes and labs are located, this community is filled with like-minded, academically focused students.

Hartwick is supportive of LGBTQ & Ally students. This community intentionally allows for students who are LGBTQ-friendly to live together in a positive, supportive community. In addition to creating a safe space for students of all identities, this theme community embraces honest dialogue about gender, gender expression, sexuality, and interpersonal relationships as a means toward self-awareness. All members of this community participate in Safe Space Training. This community offers gender-inclusive housing.

Hartwick has a variety of ways students are involved with the arts, whether or not they’re majors. Students who enjoy creating art in any medium and/or have a passion for all the performing arts tend to call this community home.

Honors housing provides students with a special experience by fusing residence hall living with honors learning, and provides a stimulating intellectual and social atmosphere for you to enjoy. Students must be in the Honors Program in good standing, or be the roommate of a student in the Honors Program.

The Nursing community serves as a support network for Nursing majors. The community provides residents with academic support, increased level of contact with faculty/staff, a close social network, and information about the Nursing program and profession.